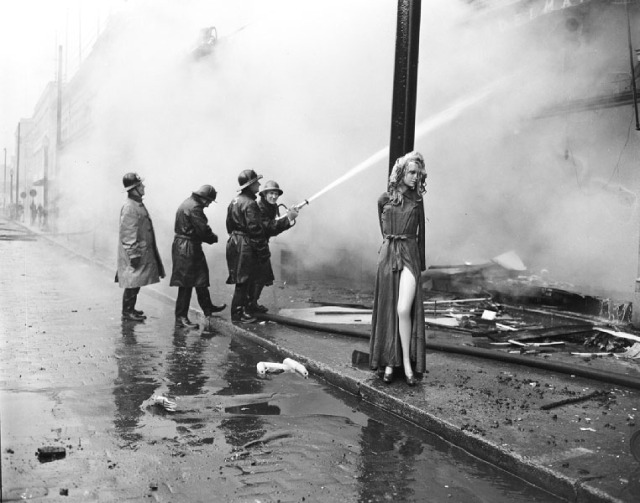 Remember Adelman’s Department Store in downtown Windsor? I do – sort of, but there are plenty of people who recall this beloved, long gone department store, (along with Smith’s), practically with tears in their eyes.

When my husband and partner Chris Edwards located the bizarre photo above, (which he intends to include in our latest book: “500 Ways You Know You’re From Windsor” to be released spring 2012), I knew it was a blog waiting to happen.

There wasn’t much info to go with photo – just the year (1948) and location. My guess (which might be why one firefighter was looking at the camera) is the mannequin was placed against the pole purposely.

In an effort to unravel this little mystery, some digging on-line led me to discover that today, Dec. 14th, just happens to be the 63rd anniversary the fire that ravaged the store.

According to Jill Kanwischer, Administrative Assistant at Windsor Fire & Rescue Services, (windsorfire.com) who was good enough to check the records for me today, an overheated furnace was the cause and the estimated loss was $101,249.85. Apparently, the building was a “total loss”.

Since I also learned that Adelman’s shut its doors in March of 1979, I imagine the building was rebuilt or the store was relocated. Perhaps a kind reader or two can fill in a few details for me, especially about the crazy photo above.

So far we have gathered approximately 475 photos of iconic places from 1945 to 2000 Windsorites remember that will be featured in the book. We want an even 500.

Photos we are still looking for:

If you or someone you know have any snapshots or slides you could share with us of these places, please contact me: elaine@walkerville.com, or call Chris at Walkerville Publishing: 519-255-9527.

(Our latest local history book, “Windsor Then – a pictorial essay of Windsor’s Glorious Past” is currently available at many area locations. For information go to walkerville.com.)

How history was taught in my day: memorize lots of boring dates and facts, watch corny old black & white history films. There was one bright spot, however. Grade 9 history at Walkerville Collegiate with Miss Falls (Georgina) when she taught a section on local history and took us on a field trip to explore some of Windsor's built heritage. Due to a series of peculiar events, celebrating local history became part of my business. My company, Walkerville Publishing Inc., (partner is Chris Edwards) launched "The Walkerville Times" in 1999 and we produced 61 issues - the last in 2016. In 2004, we began producing local history books; that year we released "Best of The Times Magazine". Our current titles include 5000 Ways You Know You're From Detroit, 500 Ways You Know You're From Windsor, Walkerville - Whisky Town Extraordinaire, and Windsor Then - A Pictorial Essay of Windsor's Glorious Past. I also wrote a novel, Time Trespasser, that blends time travel with local history. I am working on a sequel. I am a writer, editor, blogger, photographer, mother, wife, sister, activist, traveller, gardener, knitter, glass is nearly full person.
View all posts by Elaine Weeks →
This entry was posted in Fashion, Lost Buildings, People, Windsor Now, Windsor Then and tagged 1948, 500 Ways You Know You're From Windsor, Adelman's Department Store, Chris Edwards, frontpage, history, History Babe, iconic, inferno, Joan of Arc, mannequin, stake, Walkerville Publishing, Windsor Fire & Rescue Services, witch. Bookmark the permalink.

1 Response to Someone Yell Fire!? 63rd Anniversary of Adelman’s Inferno