I Read You Loud and Clear Dad.

The phone calls came about twice a month, almost like clockwork. It would be Dad announcing he had a bag of magazines to bring over. A voracious reader he could plow through probably a good dozen of them a week, in addition to a couple of newspapers a day.

No doubt his interest in the written word was due to having to abandon school after Grade 7 to go to work. It was the Great Depression and his father had just died. So he continued his education on his own, by reading whatever he could get his hands on.

And because his formative years were lived during a time in history where nothing was wasted, Dad felt compelled to pass the magazines along when he was finished with them. But really, I knew it was his excuse to have a little visit.

Once I asked him why he never read books. He said he didn’t have time; magazines and newspapers were faster. Well, he certainly was a very busy man so that made sense. Therefore, it’s interesting that he is holding a book in the portrait Pat Sturn took of him while he was Mayor. (Until I inserted this photo into this post at “full-size” I hadn’t noticed the subtle positioning of the mayor’s “chain of office” at his left.)

His incredible work ethic was developed during the Depression as well. Dad learned a trade and opened his first shop in his hometown of Montreal at the age of 20. Having already been in the work force for six years during a time in Canada’s history when many cities experienced over 40% unemployment, he experienced first hand the injustices meted by some employers on anyone who could actually find work; he decided it would be best to be his own boss. 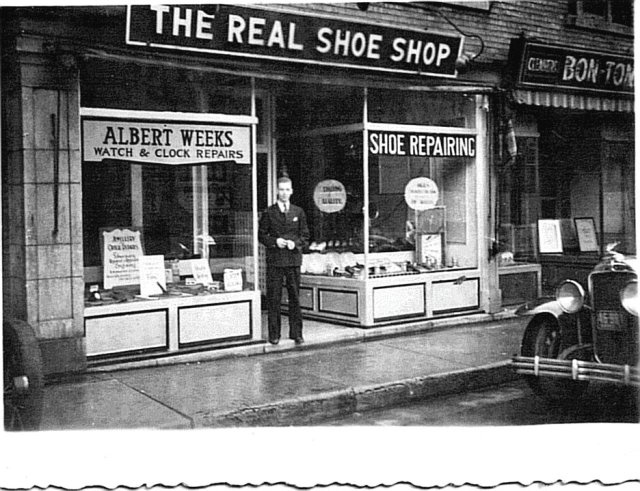 Fortunately, his flat feet kept him out of WWII and he moved to Windsor shortly after the war with his wife Sheila and their twin girls. His political aspirations had begun to surface and family legend has it that he was looking for a city to become mayor of. Not being a francophone meant his chances in Montreal were slim.

Shortly after arriving in Windsor, he assessed that all was not well in his adopted city. Windsor had a reputation as “sin city” and was a hotbed for illegal gambling, prostitution, after-hours drinking and other criminal activities with the police turning a blind eye.

So, Dad being Dad, decided to take a stand and formed the “Citizens Action Committee”. My mother was probably not all that thrilled about this development but I’m sure she believed in him and knew that Dad was doing the right thing. It wasn’t until several years after the Windsor police scandal that the important roll Dad played was revealed.

“A watch repairman and jewellery shop owner, Weeks formed the Citizens Action Committee which pressured the municipal and provincial governments to investigate “police indifference to widespread lawbreaking in Windsor.

Weeks met secretly with OPP officers in Detroit on several occasions to pass on information regarding Windsor police corruption.”

The above quote is from “Portrait of a Scandal” by Robert Earl Stewart, which appeared in the March 2002 issue of our publication, “The Times Magazine” here. It is also featured in our local history book, “Best of The Times Magazine”. 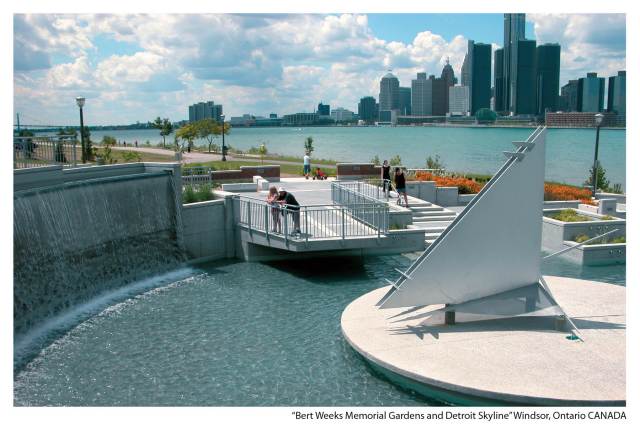 Dad died in 1990. His remains were cremated and scattered as was his wish. Bert Weeks Memorial Gardens, a beautiful water-themed park and garden, was opened in 2005 after friends spent many years raising the funds to build it to honor him and the devotion he had for the city of Windsor. It is a fantastic addition to Windsor’s waterfront and part of Dad’s dream of an unimpeded trail of parks along the Detroit River for people to enjoy.

The Gardens is therefore more than a park or a memorial, it’s also a place where Dad’s family can go to honor and remember him. The yearly neglect of this city jewel by the city of Windsor and recent vandalism (see article here) is surprising and very disheartening.

It’s Father’s Day. Call your Dad, if you can.

How history was taught in my day: memorize lots of boring dates and facts, watch corny old black & white history films. There was one bright spot, however. Grade 9 history at Walkerville Collegiate with Miss Falls (Georgina) when she taught a section on local history and took us on a field trip to explore some of Windsor's built heritage. Due to a series of peculiar events, celebrating local history became part of my business. My company, Walkerville Publishing Inc., (partner is Chris Edwards) launched "The Walkerville Times" in 1999 and we produced 61 issues - the last in 2016. In 2004, we began producing local history books; that year we released "Best of The Times Magazine". Our current titles include 5000 Ways You Know You're From Detroit, 500 Ways You Know You're From Windsor, Walkerville - Whisky Town Extraordinaire, and Windsor Then - A Pictorial Essay of Windsor's Glorious Past. I also wrote a novel, Time Trespasser, that blends time travel with local history. I am working on a sequel. I am a writer, editor, blogger, photographer, mother, wife, sister, activist, traveller, gardener, knitter, glass is nearly full person.
View all posts by Elaine Weeks →
This entry was posted in People, Windsor Now, Windsor Then and tagged 1937, 2011, Albert Howard Weeks, Bert Weeks, Bert Weeks Memorial Gardens, books, boss, call, City of Windsor, corruption, Detroit River, Father's Day, flat feet, garden, Great Depression, honor, love, magazines, mayor, memorial, Montreal, Ontario, phone, police, Quebec, reading, respect, scandal, shop, sin city, trade, watch maker, watch repair, water, Windsor, WWII. Bookmark the permalink.

3 Responses to I Read You Loud and Clear Dad.