Fall From Grace – A Hospital Then & Now 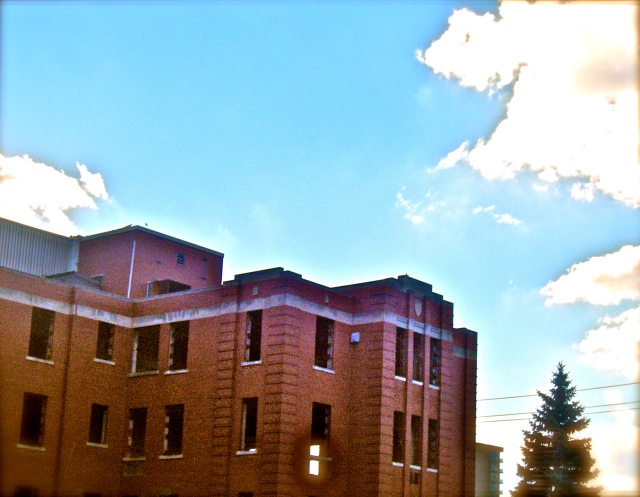 Perhaps it should now be known as “Dis-Grace” Hospital due to its dilapidated condition and the controversy surrounding a project that was initially regarded with so much enthusiasm. Closed and sold for $800,000 in 2004, the plan was to convert the site into a long-term care facility, something that is desperately needed in this area.

But the contractor hired by the provincial government to develop the facility is millions of dollars in debt. Work on the site continues to be delayed while the buildings sit empty, long-term care patients occupy coveted beds in the city’s two functioning hospitals and area residents grow increasingly frustrated and angry over the lack of action and the condition of the property.

Ontario NDP leader Andrea Horwath has called on the province’s Auditor General to investigate the long-term care bed crisis in Windsor and Liberal government’s decision-making around the failed bid to convert the former Grace Hospital into a 256-bed facility.

“Needless to say, this situation is inexcusable,” said Horwath in a letter sent to the auditor general’s office on Monday. “This failure to build these new long-term care beds has left seniors stuck on waiting lists. It has backed up emergency rooms, cancelled surgeries and forced the LHIN to apply a “crisis” designation.”

Horwath concluded that, “Windsor families deserve a thorough explanation to the many lingering questions” in calling for the audit investigation.

Why don’t we travel back in time to 1946 when Grace Hospital served a vital role in the well being of the people of Windsor? Enjoy. 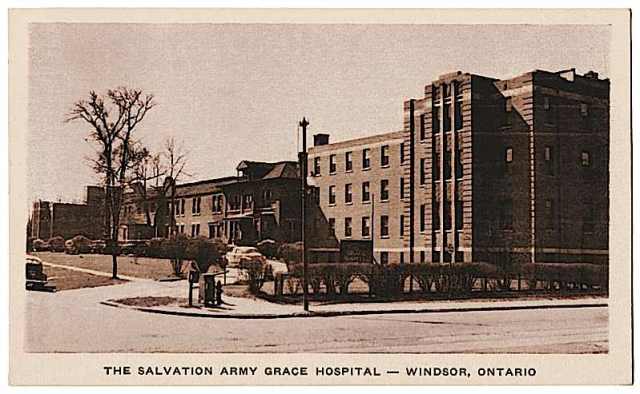 A Salute to the Girls of Grace Hospital

It is 6:30 a.m. on a cold and biting January day in 1946. The frosty air has cleared the sleep from the heads of a group of breathless young girls hurrying into a basement dining room of the Sally Ann’s Grace Hospital on Crawford Avenue.

Tossing their navy blue capes over the backs of chairs, they bolt their breakfast. Juice, porridge, bacon and toast today. The clatter of silverware.

“Marge sure got hell for bumping a patient in the O.R. yesterday.”

“I hear she lost her half-day.”

6:50 a.m. Rushing down the hall for morning prayers. Led today by Major Doris M. Barr, Superintendent of Nurses. Finishing with a not-too-enthusiastic rendition of “Whiter than Snow”.

And now the 12-hour day begins. With a two-hour break in the afternoon (if they aren’t too busy). Student nurses dashing off (everything is done on the double here) to duty in the Case Room, Nursery, Children’s Ward…

A long day of thermometers, bedpans, dinner trays, pills, injections, squaring of bed corners. A severe floor “super” who will, while chatting with patients, slyly run her finger along window sills to ascertain if our girls have dusted them.

Betty is on duty in Second South. Just a bit intimidated by the cantankerous old man in the Eager Room. Not unexpected. At $5 per day he has the most expensive room in the hospital.

Uniforms, one suspects, designed to eliminate any hint of sexual allure. In this respect they clearly fail in their purpose.

The day wears on for the girls in the Grace Hospital School of Nursing. No one is allowed to relax. There is a constant hum of efficiency. The hospital richly deserves its reputation as one of the finest anywhere in Ontario.

This afternoon, down to the basement classroom for one of the formal lectures. Dr. Arthur Lyon is lecturing on gynecology. (One of the many subjects on which the provincial examinations will be based.) Tired young ladies fight off sleep. It isn’t the doctor’s fault.

Seven p.m. Or 7:15. Or 7:30. The day finally ends. Back to one of the five old houses on Oak, London [University] and Crawford, used as residences (before the central residence was erected on London Street, just west of the hospital, in 1954).

A few of the girls will go out with boyfriends this evening. But not many. And those who do will be careful to observe the 10 p.m. curfew. Well…most of them.

And the weekend is coming. Every other Sunday, time off from 10 a.m. to 2 p.m. An entire four hours to do whatever they please (within the limitations of decorum). And, on the other Sundays, the coveted “two-off” — from 2 p.m. until signing-in time. Let the studying wait, it’s a holiday.

Any emolument? Certainly: $5 per month. For seniors, that is. For years One and Two, the stipend is $3 and $4 respectively.

A tough life? Perhaps. But when it’s all over, the march behind the Windsor Citadel Band, proudly playing “The Montreal Citadel”. The new white uniforms. Capes thrown back over shoulders, scarlet linings dazzling in the May sunshine. Down London Street and up Ouellette Avenue to H.M.C.S. Hunter for the graduation ceremonies.

A dozen red roses on each girl’s arm. The graduate’s pin proudly displayed. The photographs by Josephine A. Smith. The provincial examinations in September. The right to write Reg. N. after their names.

Joining the alumnae of hundreds of girls trained under such leaders as Brigadier Alice M. Brett from the time the Sally Ann bought the old Ellis home on Crawford to turn it into a hospital in 1920 until the final graduation in 1974.

A salute to you girls. They don’t make ‘em like you any more.

Raised in Walkerville, the late Al Roach wrote for The Windsor Star for 43 years and was a regular contributor to The Walkerville Times and The Times Magazine. He was the author of two books on local history, “All Our Memories”, and “All Our Memories 2”.

More background on the current situation of Grace Hospital:
http://www.windsorstar.com/health/Frustration+mounts+with+repeated+delays+Grace+site+Windsor/4168145/story.html#ixzz1FJcNENL2The

How history was taught in my day: memorize lots of boring dates and facts, watch corny old black & white history films. There was one bright spot, however. Grade 9 history at Walkerville Collegiate with Miss Falls (Georgina) when she taught a section on local history and took us on a field trip to explore some of Windsor's built heritage. Due to a series of peculiar events, celebrating local history became part of my business. My company, Walkerville Publishing Inc., (partner is Chris Edwards) launched "The Walkerville Times" in 1999 and we produced 61 issues - the last in 2016. In 2004, we began producing local history books; that year we released "Best of The Times Magazine". Our current titles include 5000 Ways You Know You're From Detroit, 500 Ways You Know You're From Windsor, Walkerville - Whisky Town Extraordinaire, and Windsor Then - A Pictorial Essay of Windsor's Glorious Past. I also wrote a novel, Time Trespasser, that blends time travel with local history. I am working on a sequel. I am a writer, editor, blogger, photographer, mother, wife, sister, activist, traveller, gardener, knitter, glass is nearly full person.
View all posts by Elaine Weeks →
This entry was posted in Lost Buildings, Windsor Now, Windsor Then and tagged Al Roach, Andrea Horvath, care, caring, community, cover up, debt, dollars, facility, fall, government, Grace, health, hospital, investigation, learning, long term, NDP, nurses, patients, ruin, Salvation Army, school, teacher, The Windsor Star, training. Bookmark the permalink.